Top » Catalog » About » About Satyabhama 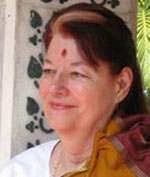 Click here to listen to two radio interviews with Satyabhama on WMNF-FM in Tampa, Florida. She was twice interviewed on the weekly UltraSounds radio program by host Eluv. Scroll through the list of available programs to find her interviews.

Margalo Ashley-Farrand, given the name Satyabhama by Sadguru Sant Keshavadas, began having Christian mystical experiences at age 14. In 1981, she completed the arduous Narvarna Sadhana and Shiva Sadhana as taught by Sant Keshavadas. Thereafter she learned to perform the ancient pujas and fire ceremonies.
Satyabhama met Satguru Sant Keshavadas in December 1980 at his Temple of Cosmic Religion in Washington, DC. She also met Namadeva the same evening, and a year and a week later they were married by Satgurus Sant Keshavadas and Rama Mata. Satyabhama studied with Sant Keshavadas and Rama Mata and with Namadeva for the next 3 decades. She became a Vedic priest in her own right in the mid-1980s and worked with Namadeva Acharya in performing and teaching ancient mantra techniques and spiritual practices.
In 2008 and 2009, like Namadeva Acharya, she received guru diksha to be a guru from Satguru Rama Mata, Sadguru Sant Keshavadas' widow, to whom he passed the lineage in 1997.
When Namadeva Acharya discovered that his death was imminent, he told Satyabhama that he wanted her to continue their mission of teaching the dharma, and he gave her a powerful initiation to enable her to teach his workshops with his spiritual energy. Since then, she has continued to travel and teach and also to manage the Gayatri Temple in Beaverton, Oregon, with the encouragement of Satguru Rama Mata and her family.
Satyabhama has a B.A. from New York University and a Law Degree from Southwestern School of Law. Dedicated to serving God through humanity, she is a certified mediator and maintained a private law practice from 1981-2007. Prior to her law practice, Satyabhama worked to further the status of women through her involvement with the National Organization for Women and the National Women's Political Caucus.
In 1992, she ran for Los Angeles County Supervisor and in 1994 for the California State Assembly. Concerned with elections fraud, she co-founded the Institute for Fair Elections, whose president was interviewed in 1996 about documented voting irregularities on the television program, 60 Minutes. She is listed in Who's Who of American Women, Who's Who in American Law, Who's Who in America and Who's Who in the World.
In 2004, Satyabhama assumed management of Saraswati Publications, LLC and Sanatana Dharma Satsang, Inc., a 501(c)3 religious organization. She is committed to making the world a better place in which Divine Law becomes the law of life.

There are no products available in this category.